1. The right to display a Umbraculum. During the Middle Ages, a Umbraculum would be carried above the Holy Father during processions. Designed with stripes of yellow and red (traditional papal colors), the silk canopy is a symbol of the Pope's authority and is displayed prominently on the right side of the main altar at every basilica. 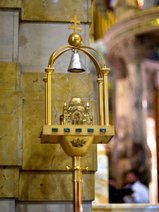 2. The right to display a Tintinnabulum. During the Middle Ages and Renaissance, the Tintinnabulum was used to alert the people of Rome of the approach of the Holy Father during processions. The Tintinnabulum consists of a small gold bell within a hard carved wooden frame accented with gold leaf surmounted by the Papal Tiara (the crown traditionally wore by the Pope) and the Papal Keys (see Matthew 16:13-16:19). It is typically mounted on a pole and displayed in the church sanctuary. 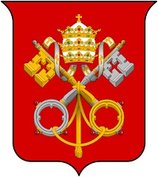 3. The right to display the Papal Symbol of Crossed Keys on banners, furnishings, and on the seal of the Basilica.

4. A special privilege is provided to the Rector of a Basilica in that he may wear a black 'mozetta' or cap over his surplice with red piping, buttons, and buttonholes in the exercise of his office.


Photos are courtesy of Bellevision Media Network.
I get confused between cathedrals and basilicas. What's the difference?
A cathedral is the home church for the bishop or archbishop of a Catholic diocese. It takes its name from the bishop's chair, called a cathedra in Latin.

A basilica is simply an important church building designated by the Pope because it carries special significance. A basilica may or may not be also be the cathedral of the diocese. For example, the University of Notre Dame has the Basilica of the Sacred Heart on its campus, but its not where the primary cathedral of the Diocese of Fort Wayne-South Bend is located.